No, not a band's album recommendation. This is a new game / new stats.

Multiply your hits total kms × total days, divide the result by your number of hits squared, and you'll have your own Hit Score.

For the purpose of this game / stats (and calculating the Hit Score), I am assuming that great hits are those which banknote traveled a long distance for a long time. A Heavy Hitter has many of those, so their Hit Score is higher.


How to find your totals in order to compute your Hit Score?

If you don't want to add your kms and days by hand, you may find the total of kms and days your hit-notes traveled if you use the nigmm statistics application. Check "Hits Summary". It will be something like this (I highlighted the numbers that matter for this purpose): 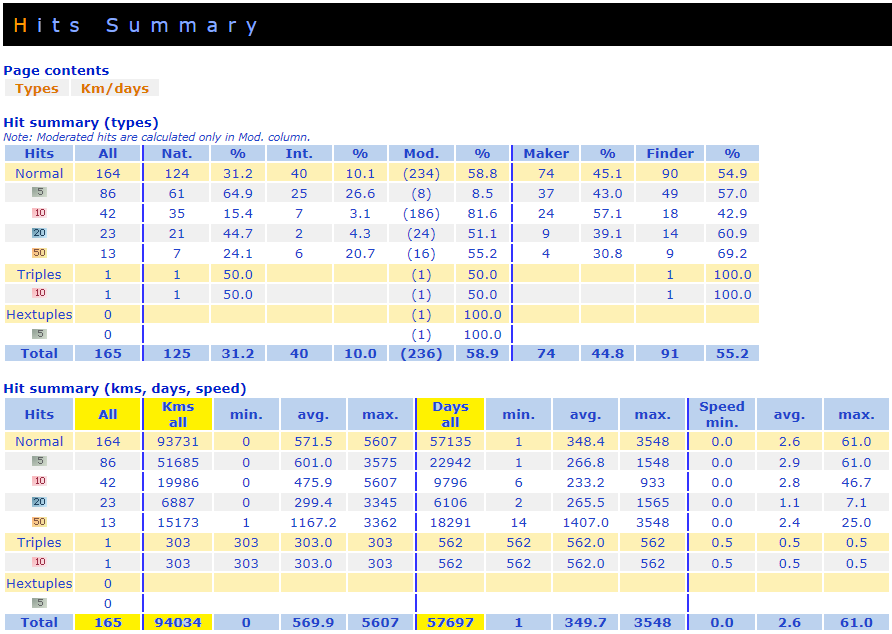 So here's the ranking, only for active users. Notice that below the average line some numbers are grossly outdated, but the top 130 or so are updated at the moment (2018-06-13).

If you have at least 10 hits, please send me your numbers.
Let's find who's the Top Heavy Hitter (also known as The Luckiest Star on EBT).


* — EBTors who are not active users of the forum.

Final note for those who like maths: the Hit Score is a measure of Banknote Absement, which dimensions are L T.
Last edited by lmviterbo on Fri Sep 06, 2019 9:12 pm, edited 29 times in total.
Top

Re: The Heavy Hitters / Greatest Hits

Here is the other ranking in this topic, listing the Greatest Hits of all time and space.

While I figure a good way of presenting the ranked list, here's the Top 30 Greatest Hits (the ones in red are triple):

I am going to include all Hit Scores over 10.4 million kms × days (almost 70 of these at the moment). Below that, it's much harder to find them at the hits statistics, due to the limits (for performance reasons) imposed on what's shown to the users.
Last edited by lmviterbo on Fri Sep 06, 2019 9:13 pm, edited 17 times in total.
Top

410
list of (known by me) latest "codes_country.txt" files Blog
Top

Re: The Heavy Hitters / Greatest Hits

This is what I was expecting. I decided to create this kind of hit score because I had two very good hits in less than a month, for which my fellow countrymen congratulated me: 1 and 2. To settle on some reasonable score formula, I tried to check all EBTors who had their nigmm stats available, and I was surprised to see I was in first place. I was about to quit publishing the game, because I didn't want it to look like I created a formula specifically designed for me to be able to brag of being the top player… Then, I decided o check what would be the Hit Score of all EBT hits combined, and I was relieved. After all, I was not that far from average, so there ought be much better than me. And well, there you are, great!

The feature I like the most about this game is that it has to do with being lucky on a specific level, and is totally unrelated to how many hits you have or how many notes you tracked. So anyone can be a Heavy Hitter. It probably helps a little being from a peripheric country like Portugal, Finland or Greece, because notes are able to travel longer distances within the Eurozone. The other component (time) is a small advantage for EBTors in those countries where notes last longer (I actually don't know which ones). Other than that, it's mere luck and democratic.

The ranking on the first post is now updated with the new Luckiest Star (romain17) and the updates from Burdie and Bryce. Moise, as you must have noticed, I used your old NIG stats of almost 10 years ago. I am really sorry that nigmm doesn't work with your 2M notes.

If anyone wants to be removed from the list (Moise?), you just have to tell me.

I have tried to figure out the answer to this question: what are the Hit Scores for each country in the Euro Area (plus the four microstates with formal agreements)? I can only compute the exact scores for countries with 330 hits or less. Here is my attempt though, with numbers rounded to the nearest thousand. Mind you that these figures might be up to 10% off (or even more, but I don't think so).


I would love if avij or someone in the Development or Database Workgroups could provide the total kms and days for hits per country. I realize that the totals, at least, must be too wrong, since they should be around the average or median, not near the end of the ranking.


(In the meantime, I have updated the first post with all new contributions and some other Heavy Hitters I have found.)
Last edited by lmviterbo on Fri Sep 06, 2019 9:12 pm, edited 2 times in total.
Top