Re: tool for entering notes

by lmviterbo
Here's an idea I'd love to see on some next version, if it's easy to implement: the ability to delete all comments that are on the database but not on any note.

Let's say I write "Market Anjas Das" on a comment. Later on, I find out there's a typo, and I should have written "Market Anjan Das". What do I do? I use EBT's "Request Support" tool. Once the change is made, I will run Billy and access Options | Preferences | Retrieve locations, in order to retrieve this new comment. Then, I will access Options | Manage locations / comments, in order to locate the old / wrong comment and delete it from the database.

Ideally, when I retrieve locations, I ought to be able to choose the option "Overwrite all comments". (Because other users might use this database differently from me, this should be an option, and probably not the default option.)

by Moise
"Nice to have" too would be:1. some confirmation when storing notes hitting F5
2. Closing app without storing notes now possible,some warning would be nice

ok,thats all on my wishlist till now,some minor Bugs i dont mind

Keep on the great work,THX

by Moise
Looks like BILLY hangs up after 444 notes everytime.Actually i dont enter that much notes in one form,i always store after 50 notes,so after 8 forms stored and 44 notes in the 9th form icant enter more notes,although the 444th note shows up green in the enteringform.Even deleting the whole note including printercode doesnt help.Only storing the 44 notes withF5 and closing Billy helps,after restarting it works again(dont know if only to next 444 notes,cause i dindt try it till now ;.) )
BTW Automatic storing after xx notes(in settings) doesnt work doenst work for me

Wonder if it works for someone or me just doing wrong

by lmviterbo
Well, I guess it's Bug Reporting Day. So here's a somewhat inconvenient bug (?) that has happened to me:

. Then you start adding a bunch of

, but you forgot to change the value.
If you realize your mistake before uploading, you may still change the values individually on each of the mistaken notes—only to realize that, after these changes are made and you upload them, they are in fact uploaded with the old values.
If you don't realize your mistake and upload them anyway, some of those error notes may be detected as errors. In that case, you will receive a message mentioning that those notes were not uploaded because of some mistake. If, after that, you change the values of the unsent notes individually and try to upload them, you will get the same message again—because, in fact, they are being uploaded with the old values (just like the first case).

Wonder if it works for someone or me just doing wrong

I'm saving after each 5 bills and I can't recall having had any problem about this. Not sure if I ever needed the autosaved bills but I believe I did.

by taucher
Billy 0.27 is available:

by lmviterbo
Thanks for the update but, in fact, I'm now getting errors I had never witnessed.

1. Tried to enter a Y/Y note. Denomination already prefilled, printcode (all OK), tab, serial, BUZZZ on the check digit. The alert was right, because it was a V/V note, I just had misread my own writing. Tried to change the Y on the printcode, BUZZZ, moved the cursor to try on the serial, and BUZZZ, BUZZZ, BUZZZ: both the printcode and the serial (still missing the check digit) were highlighted in a dark red that was new to me, and the focus pingponged between printcode and serial, with a BUZZZ for every beat, ad infinitum and unstoppable. Since I had already a lot of notes entered, I tried to upload them, fortunately with success in spite of the error alerts.

2. After all this, I kept on entering notes. I wasn' looking at the screen. Everything was going fine, except that, after two notes entered, I looked at the screen, and the lines with the notes didn't show up. I didn't know if they were already recorded, so I tried to upload these notes I wasn't seeing but had entered. It was successful, fortunately.

After this, I just shut Billy down, and ran it again. No more errors.

I hope I have been clear in the steps I described.

by lmviterbo
After the update, I got rid of the annoying volume change after any long pause (when I paused entering notes for more than 15 seconds or so, the volume of the alert buzzes was automatically set to some loud level, until I manually changed the sound volume; this doesn't occur anymore).

On the negative side, apart from the error I mentioned in my message above, I also got a different one today:

After entering over 150 notes, I clicked the "Upload all" button as usual, and everything went fine except that in the end the entries were still showing on the screen, contrary to what was usual (and a rogue OK appeared over the menu area). This hadn't happened before and may be related to the "Note already entered" lines, which I believe I still hadn't have after the update.

After this, I checked and the notes were effectively uploaded. So I decided to click the "Delete all" button, as I usually do when I get these messages. Again, everything went fine — except that the lines are still showing, in a slightly different fashion now (notice the top rows missing): by lmviterbo
I just found out that I can click on where the error note should be (at the top), and it will change color. Also, if I blindly double-click on that supposed line, the link works. by lmviterbo
Here is another part of the behaviour for the same bug I have been reporting.

After uploading notes and having a hit, I double-click on the first line (where the hit was supposed to appear) and get the following message (it can be translated as "the parameter is not correct"): 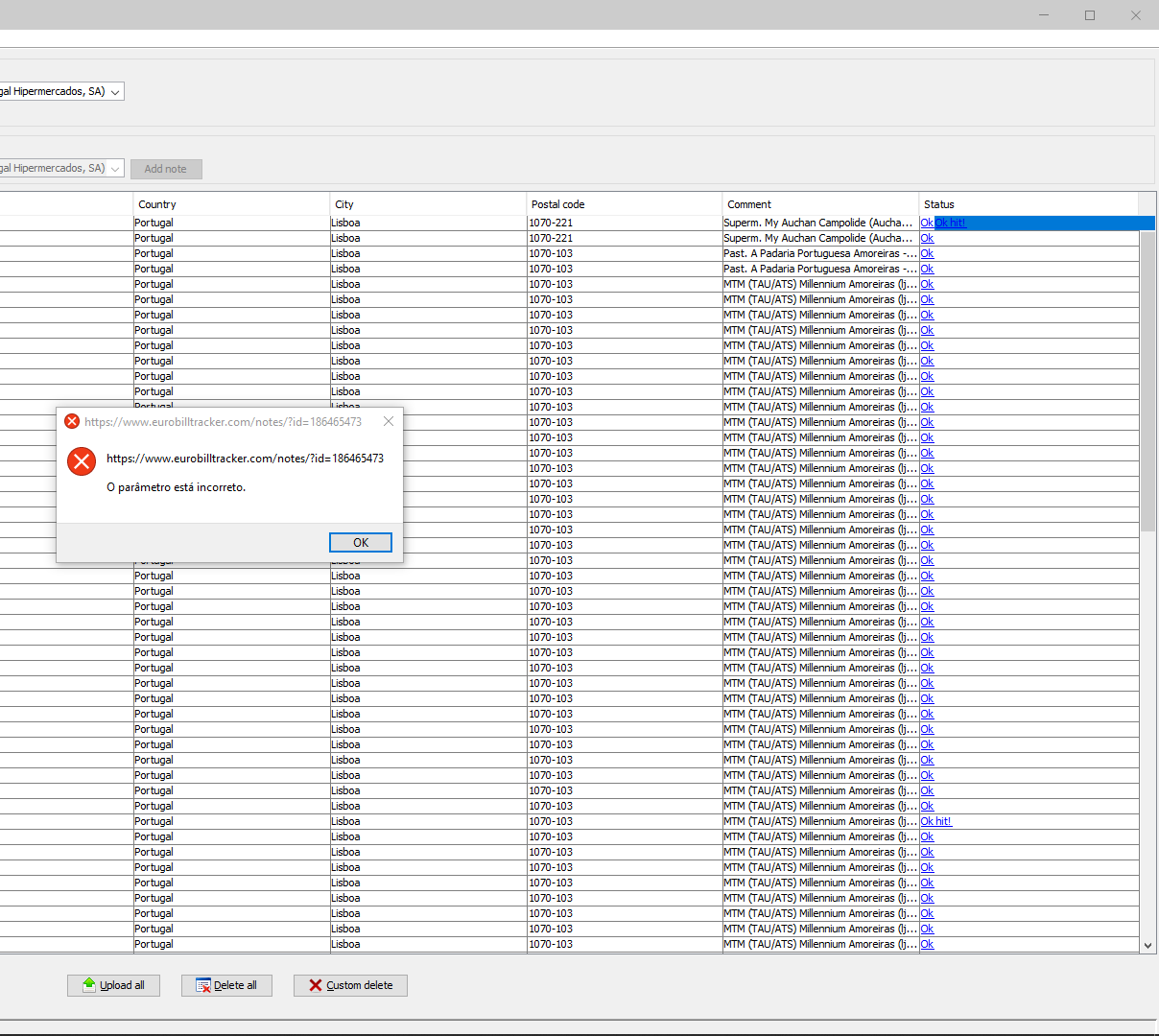 by taucher
Billy 0.29 is available: