Page 3 of 58
by Fons
Does anybody know more about something like "Wullom puend"?

It was written on one of the notes I got yesterday.
by androl
Wullom Puend? Don't know

... like I thought, müşteri is really Turkish, it means customer, client, buyer

and unutdu also seems to be a word in Turkish or Azerbaijanian, but I can't find out what

by androl
this is the note

it says müsteri, not müşteri
by PEKU
Anybody see a picture of a fish on a note?

Where did it stand for?
by redrabbit
Never seen a fish on it before.

by Helge
What is this?

It's looks like a little princess...
by marcus92
What's the text under the scratches on this note? 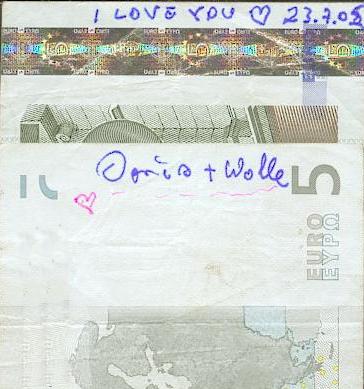 marcus92 wrote:What's the text under the scratches on this note?

MOH could be Masters of Hardcore
by Viperazzi

marcus92 wrote:What's the text under the scratches on this note?

MOH could be Masters of Hardcore

You read it upside-down. You should look at it the other way. Then it clearly says "€300 SS". SS could be the initials of the person who counted the money, and the scribble under this can be some sort of a signature. Many businesses write the amount of money on the top note of all values of notes in the cash register before the money is stored somewhere safe.
by pastel
Has anybody ever seen a note stamped with the letters TR inside a circle? I`ve already seen 2 of those.. Don´t know what it means

by Fons
I had a note (couldn't scan it

) with all kinds of squares and stuff made in the Europe-map. Almost all of them had dots in them, (a few in Finland, 3 in the UK, and a lot more spread over the rest)

In the northsea there were two letters: "FR" (probably for "France"(?))


Mabye somebody wanted to play risk...
by mirandolina
Certainly Quarrata, I've been there! It's in the province of Pistoia, west of Florence.

It looks like it, but Quanata does not exist and Quarrata does, and it lies around the indicated spot