The next year will be emitted a new 2 € joint commemorative for the 10 years of circulation of the euro-cash: beginning from tomorrow 6 june till the 24 will be able to be voted between various sketches.
http://www.eurocoin-competition.eu/it" onclick="window.open(this.href);return false;
European soul, European pride.
Top

The five projects selected will be visible tomorrows.
I hope the vote will be more serious than in 2008!

these two designs obviously didn't make it to the finals:

I voted for the first one

In my opinion are acceptables 1 and 5 only, I voted 1.
European soul, European pride.
Top

find another design that didnt make it :S - this was my design

The following is the design meaning;
Coin shows a butterfly with € as its body. Butterflies in their life cycle change from limited caterpillar to free flying butterfly. In 1999, the € was introduced as virtual limited currency but in 2002 it did a metamorphosis, euro banknotes & coins were introduced which gave Europeans more freedom.

more detailed description;
The euro was not born in 2002 like a butterfly is not born as butterfly but as caterpillar - so the 1999-2002 is the caterpillar stage with limited freedom like the euro was (it was only a virtual currency) - in 2002 the euro did a huge change (metamorphosis) from just a virtual currency to a true currency with with euro coins and banknotes - this change is reflected by caterpillar being transformed into a a free flying butterfly
euroHOBBY
http://www.myEUROHOBBY.eu/
Top

I voted for the 2nd one. Liked the first one too but it looks a bit too crowded.
Top

It looks like the third one has the '10': the white areas are a part of it.

But because it doen't have more (I think it's a bit boring: it has only the European map on it), I didn't vote for this one.

My choise was the second one.

Ewri wrote:I voted for the 2nd one. Liked the first one too but it looks a bit too crowded.

It looks like the third one has the '10': the white areas are a part of it.

But because it doen't have more (I think it's a bit boring: it has only the European map on it), I didn't vote for this one.

My choise was the second one.

Have not voted yet as none of the five looks really attractive to me. #1 is too full or busy. #2 is not that bad, and now (thanks to melitikus

) I also understand why the butterfly can work as a symbol of the euro. #3 would be a good idea if we did not have pretty much the same map on the other side. With #4 I like the idea that the (stretched) euro symbol is an arrow, but the 10 almost looks like a 12. Could be a nice (color) poster but not a coin in my opinion. And #5, uh. It is nice that is shows 17 filled honeycombs, representing the euro area member states. But the bee? If we think about what these coins are supposed to commemorate - ten years of euro cash - , all five are "off topic" in my opinion.

What I would have preferred is several tiny, maybe overlapping euro notes and coins. Yes, that would not have been terribly imaginative. But we have this problem that the obverse cannot have any text beyond the name of the issuing country and the "2002-2012". So there is no way of making a design more obvious by adding "Ten Years of Euro Cash" (in the appropriate language) - and that is why I would have preferred a very easily recognizable design.

Joshu, a Chinese Zen master, asked a cow:
"Do you have Buddha-nature or not?"
The cow answered: "Moo."
Top

Well, I don't like #1 very much, because they seem to have forgotten most of Europe. Everything's so very central European there. You don't see those kinds of houses in Finland, most trees here have needles instead of leaves and skyscrapers don't quite exist in Finland, either. Or, there are single small skyscrapers here and there, but nowhere several ones visible at once. The windmills, factory, children and ship look kind of international, but all in all everything in the picture that isn't simply generic, is central European. I find the design somewhat insulting, as if I didn't exist, as if I didn't count as an European.

#2 has no such problems and I kind of like the idea of 27 butterflies flying freely, though at the moment of taking the picture towards the same direction. I'm not quite sure if that's what I want from the Eurozone, though. I'd prefer us being something more than just capitalistic butterflies

#3... Ok, this one is LAZY. And I won't bother writing much either, thank you very much.

#4 shows a park where two anorectic women are walking past an ugly brick wall. Also "12" (or possibly 10?) has been written with large digits. I fail to understand what this has to do with anything. Blah.

#5? A stinging creature more closely related to a wasp than a bee is sitting on cells of honey. 24 cells are visible, three are hidden by the wasp and several others are broken. Could someone please tell me what this has to do with 10 years of euro coins? So apparently I'll go for the 27 butterflies, because it's neither insulting nor utterly pointless. Gotta check what others have written here first, though. I didn't want to read other peoples' comments before having an opinion about each design myself.
Ko saka āboliņš? Pēk pēk pēk!
Top

Also, here's something I found quite amazing while trying to vote:

Finland is apparently now longer called "Suomi" in Finnish, but "Finlandais" instead. And whereas most Finns know Germany with the name "Saksa", its new European name seems to be "Saksa Saksa"
I also very much like it how the countries are in no order. Or what kind of alphabetical system begins with letter i and has it also in the middle?

EDIT: One more interesting thing that I noticed only now is that when I originally clicked the dropdown menu and wrote "suo" in it, I was kindly hinted that I might have a Slovenian citizenship. This is also something I had never known before 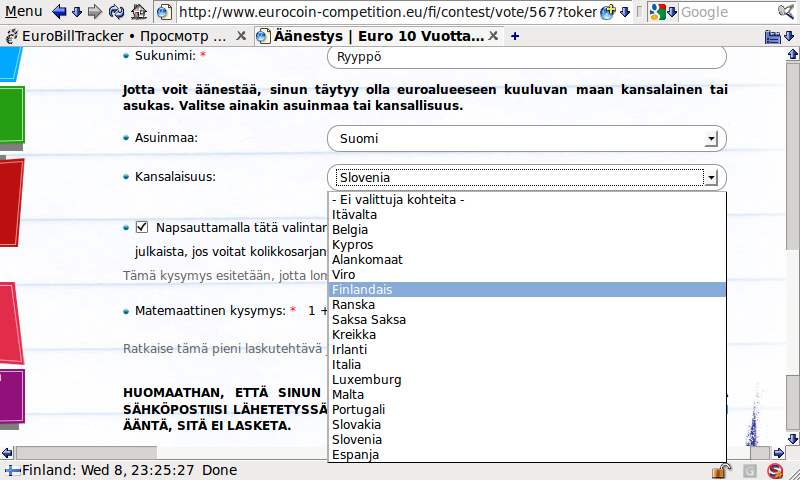