Dakkus wrote: #5? A stinging creature more closely related to a wasp than a bee is sitting on cells of honey. 24 cells are visible, three are hidden by the wasp and several others are broken. Could someone please tell me what this has to do with 10 years of euro coins? So apparently I'll go for the 27 butterflies, because it's neither insulting nor utterly pointless. Gotta check what others have written here first, though. I didn't want to read other peoples' comments before having an opinion about each design myself.

well, the bee is considered to be a very hard-working animal and there are 17 cells filled. actually i like this draft pretty much although i have objects regarding the final "minted" version. i don't think all the shadows will come out as good as in the painting (as happened with the

2 € commemorative 2011: wunderful sketch, but all the shadows and filligree lines made it look overburdened).
you brought in an interesting argument about the first draft, that's a point i hadn't considered before at all (although i don't like the style anyway). number 3 is uninspired and number 4 ridiculuos, so i voted for numer 2.
Last edited by jonman on Thu Jun 09, 2011 11:13 am, edited 1 time in total.
My profile
22.9.14 90.

Dakkus wrote:I also very much like it how the countries are in no order. Or what kind of alphabetical system begins with letter i and has it also in the middle?

My guess is the order is based on a list of citizenships in English: Austrian, Belgian, etc. (Not country names, see "Netherlands" -- but with "Dutch" it would work.) Fortunately the list is not too long.

Forgot something -- as for the Central European bias, you may have a point. However, the high rises at "eight o'clock" are a little different, I think: When I first saw that design, I thought they were a reference to the current HQ of the European Central Bank. In Frankfurt they do have such tall buildings, and the shape of these looks pretty much like the ECB towers. Also, that € with the bunch of stars is in front of the building.

So on one hand that made sense to me. On the other hand, I found it odd that among all those "generic" elements there is one that refers to a very specific place. Ah well, design #1 is over-populated anyway in my opinion ...

I like both 1st and 5th designs, although I finally voted the 1st one. (The other designs seemed to me to be too simple or too empty in sme way).

By the way: what do you think about my design, which wasn't chosen obviously? It represents the "pact" that Europeans made upon the euro, lasting 10 years and for ever. (ideally)

Basically I like your "hands" idea. What I don't like that much is the map - it makes sense in this context, but we already have a map on the other side of the €2 coin.

And then there is another problem: Yes, everybody in the euro area was invited to participate, and I hope that many contributed their designs, as you did. But I believe that the designs which were not "professionally done" did not really have a chance. Why?

No matter whether we like the 2009 "euro-stickman" design or not, I assume that the jury (which was responsible for the selection of the "final five") had something different in mind this time. So what would they do with designs that had an interesting concept but were "amateurishly" done? Had they left them as they are, people might have complained about the oh-so-primitive designs. Had they altered them a lot in order to make them look "professional", the designers may have complained.

In other words, the jury will have picked designs that were done by people who have quite a bit of experience with designing, preferably with designing coins. Not that the resulting five are so great, but technically they could all be turned into coins. By the way, I still have not made my mind up yet. #1 or #2, that is the question ...

tabbs wrote:everybody in the euro area was invited to participate, and I hope that many contributed their designs, as you did. But I believe that the designs which were not "professionally done" did not really have a chance.

I think they "redesigned" all of the five contributions in the competition. Probably, they looked much less "professional" when the designers sent them in.
They all have the same colours, but you can still see that they have been done with different techniques
Joshu, a Chinese Zen master, asked a cow:
"Do you have Buddha-nature or not?"
The cow answered: "Moo."
Top

Yes, I think they brushed them up. But I find it hard to believe that the jury, or anybody else except the designers, would take an "amateurish" design and turn it into a professional-looking one.

("Amateurish" in inverted commas because I do not want to belittle any of the submitted designs. The more people participated, the better. Heck, I did not send anything in - and had I done it, the result would certainly have been fairly bad.

I recognize that my design is Amateurish. Don't worry

BTW: thanks for your comments on it!

Quite a few people participated in the design contest. According to the Mint of Finland, "a total of 800 entries were sent in response to the competition, with 25 coming from Finland."

Thanks to this news, i vote for n° 1
mon nouveau nom:
my new name:
wallenberg

You will probably know that the public vote is over; on Thursday (30 June) we will know what design "made it". Judging from "private polls" (at news sites and in forums), the winner will be either #1 or #5. But who knows ...

And here we have the winner ... design #1. This piece, designed by Helmut Andexlinger (who happens to be

a professional designer at the Austrian Mint), has won. Quote from the website: "Close to 35 000 participated in the vote. The winning design received 34 % of the votes." 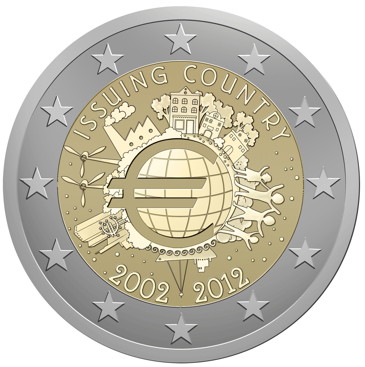 What a shame, there were some lovely designs there that had a geometric effect.

Does anyone have pics of the other 4 designs? They were taken down from the competition website.
Top

When it comes to such contests, somebody will always say or write that, no matter which design wins.

Does anyone have pics of the other 4 designs? They were taken down from the competition website.

Actually you can still view them at the competition website, provided you know the direct links/addresses. Here are the high-resolution images:

Smaller images, and the names of the five designers, are here:
http://ec.europa.eu/economy_finance/eur ... 012_en.htm" onclick="window.open(this.href);return false;