i have this banknote with different serial number and i try to valuation..
have somebody any idea ? 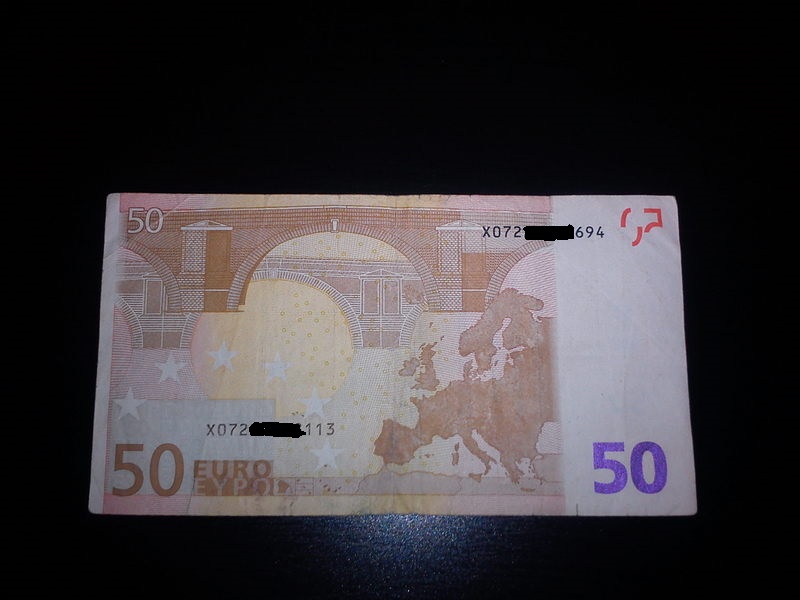 Are you sure it is a genuine note? Does EBT's insertion page successfully validate both combinations?
If you try to rub a note's coloured part on a white piece of paper it should leave a trace of ink.
There's also the infallible washing-machine test…
Bye!
Profile
Top

but be sure not to damage the note through any of these "tests". i'm not an expert, but this might very well be a genuine note with a considerable collector's worth

This banknote is genuine 100%!! .
how i can know the collector's worth?
Top

this is other side of banknote. 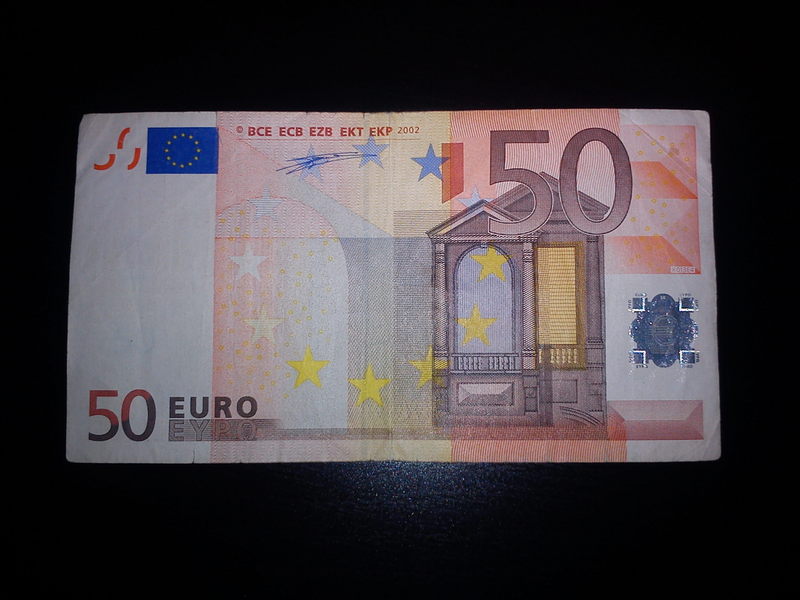 jonman wrote:but be sure not to damage the note through any of these "tests".

Well, unless the note is fake, the washing-machine test won't do anything to it since it's printed on cotton paper, but the colour might fade just a little according to ECB/2010/14.
The rubbing test won't transfer any noticeable amount of ink, I did that many times: it just leaves a trace on the white paper, but the banknote looks just the same.
If you really want to collect it though, check it by other means.
I personally doubt it's collectable: only very rare serials, i. e. from small batches, are usually of some value, plus this doesn't seem to be brand new.

honestly i really don't know, but imho there is some collector's worth. i certainly wouldn't just plainly spend it again, though i probably wouldn't keep it either since i'm not a collector. if i were you i would check in a banknotes collectors' forum (since must of us just enjoy tracking and sending the notes out again after we've had them in our hands)

I saw the original picture of the banknote and I can confirm that both serial numbers passed the checksum test.

As for counterfeit notes, checking these would be the first step. I wouldn't put the note through a washing machine, or submit it to other potentially damaging tests.

For determining the value of the banknote, the numismatic forums would indeed be a better place for that.
Money makes the world go round. We track how the money goes round the world.
Top

Indeed, do not "test" the note with any physical means such as rubbing, washing etc. They may decrease the collector value a little or very much, depending on the damage. For instance, making a note wet will always leave traces that collectors detect, and using some detergent (washing powder or such) potentially even makes the note paper glow under UV light, which is bad. Such damages are interpreted by collectors as attempts to make a note look better than it was (smoothing out wrinkles, removing dirt etc.) in order to get a higher price - in essence, it is considered fraudulent.

Numismatical forums are good places for asking the value of such a note. True errors in banknotes generally make their worth higher than their nominal value, even if the note is not in brand-new condition. How much higher depends on the rarity of such an error. I personally don't know how common these differing serials are on euro notes, but in general this error is well known in different world currency notes. Being "well known" doesn't indicate its frequency and value, since the frequency varies depending on the reliability of the printing process's quality assurance system. Being well known only means that this error is known to happen every once in a while with different currencies. The cause of it is a malfunction of the numbering machine's two printing heads, which makes the two serials get out of phase (one of the heads continues to step incrementally with each note, the other one gets stuck for a while for some reason). The resulting notes are genuine money, but they only go to circulation if the quality assurance system fails to detect them. Therefore, such a note in circulation is actually a result of two errors: a printing error and a subsequent failure of quality assurance.

If I had such a note and were willing to sell it, I wouldn't worry too much about if it is genuine or not. I'd first check it according to ECB's instructions, and if it seems genuine, believe that it really is, as far as I can tell. I'd then find out its approximate value by asking from someone reliable who knows numismatics, or on a forum or such. I'd then put it in an auction with a proper start price and see if someone buys it. I'd also say in the terms and conditions section that as far as I can tell, the note seems to be genuine, but the buyer is responsible of checking it, but in case of doubt, not obliged to buy it.
Top
Post Reply
9 posts • Page 1 of 1