The coins bear the 47-year-old king’s profile in a pose similar to that of his father, who has appeared on the Spanish version of the euro coin since the European monetary unit was introduced in 1999.

In a statement, the Economy Ministry said the old coins with Juan Carlos’s image would continue to be valid throughout the euro zone but will gradually be replaced.

Around four million new coins were minted in January after being approved by the ministry’s treasury and financial policy division in October. But part of the delay in putting the new coins into circulation was attributed to the Royal Mint, which had already issued its quota of newly minted currency when the handover of the crown took place last year.

A special €30 collectors’ coin bearing Felipe's image was issued at the end of 2014.

The reverse side of the 30 euro coin: 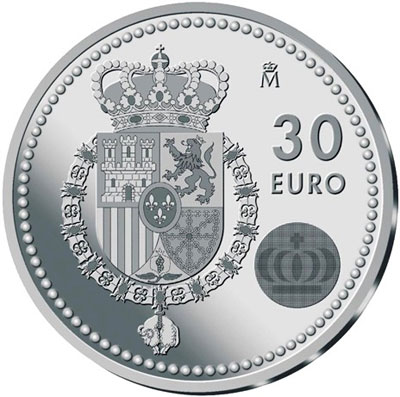 He is quite old and he wanted to let his boy be the king.
Ei sitä koskaan tiedä_Aatos99
Top
Post Reply
4 posts • Page 1 of 1