Notes and what to keep

Notes and what to keep

by aol
Hi All, I understand the idea of collecting coins
because they are easy to see where they are from
and whether its a commemorative edition etc
but with notes its a lot different,

by Montgomery Burns
I am not a collector or an expert, but I'll go ahead and mention a few things to get the discussion started. In pure value terms, that of a note is determined by a function of these two:

Condition - Uncirculated bills, obviously, will retain the most value. Value will decrease accordingly taking into account condition and rarity.


Sort of related to both of those things are notes getting pooled at any one time throughout the continent - these are new, uncirculated notes that may or may not be future classics!

aol wrote:Hi All, I understand the idea of collecting coins
because they are easy to see where they are from

In fact, it's possible to derive from any Euro banknote's printer code (also known as "shortcode"): Notes from the first position (A1) are valued among collectors around 10% more than any of the others. Notes from some plates are much rarer than others, either because the amount printed was scarce (tipically 1 million is a small figure here) or they're rarely found in circulation for known or unknown reasons.

Beware that, just like coins or stamps, fake defects are often made to rip off the non-initiated, the most infamous being the fake misprints (or miscuts) of

lmviterbo wrote:Beware that, just like coins or stamps, fake defects are often made to rip off the non-initiated, the most infamous being the fake misprints (or miscuts) of

by ART
I collect the notes of the first series by state and by signature (with several limitations to avoid excessive spending), while the Europe series only for single denomination and signature (even in this case with some limitations).

by GWR7007
First of all, I would not call myself a "real" collector. This is because I do not necessarily need notes in very good quality but take them out of circulation. Side remark: the same applies for coins.
I would rather describe my collection as one of notes I liked (for a certain reason) and therefore kept it.
I kept quite a lot of notes with the signature of the first ECB president, but as they were circulated ones, they were of course showing (strong) signs of use.
Apart from that, I kept some notes with - for me - rare combinations such as rather uncommon printers as mentioned above.
In genral, I do not keep many notes higher than

(for financial reasons). The few

(although not in good condition) were, again, rare printer/country combinations.
Additionally, I started with EBT ~five years ago. I was able to see the first generation of €-notes but saw it's withdrawl soon after that. Therefore, there wasn't a) the time to preserve notes in better quality and b) there weren't a lot of notes of the very early days of the Euro in good condition which are not owned by a merchant in bank notes. But then you pay way more than the value of the note and I am not willed to pay the prices they seem to ask. Otherwise I might have had some UNC notes of the combinations I kept.

by aol
interesting posts, thanks all.

Just wondering if the Y codes on the Europa notes are rare?

aol wrote:interesting posts, thanks all.

Just wondering if the Y codes on the Europa notes are rare?

Y/Y are more and more common in

with lots of Y002 and now Y001 are laso visible more and more, because

is on of the 3 producers of

Y/Y are very common in

aol wrote:Just wondering if the Y codes on the Europa notes are rare?

If you want to check any other combination, you may use some of the resources available. Here follows some detail on 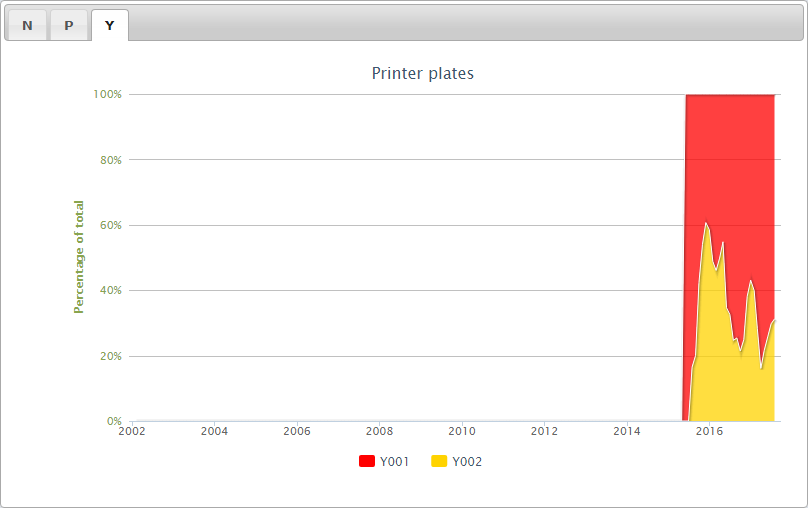 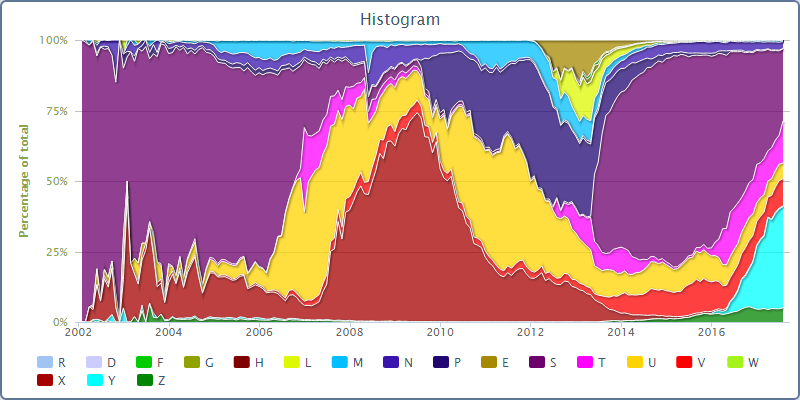 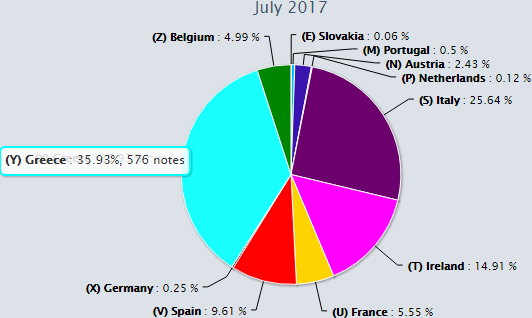 
From the most detailed EBT statistics available (do not overuse this resource, please!):

by Montgomery Burns
An interesting video I found concerning serial numbers, this thread came to mind (from the point in the video provided specifically, those are pointers which can be applied to bills of most currencies. Before that point, it's mostly specific to that currency):

by savesigita
Hello everyone! I got a 50eur note (First series) with the printer code J100 while travelling through Belgium. It might be nothing special but it is the first time in 6 years of Eurobilltracker that I find a J100. Is it rare or valuable at all? Thanks

by savesigita
Hello!
Just wondering if this note with the hologram printed slightly more left (part of it on the shortcode) has any extra value,
thanks! 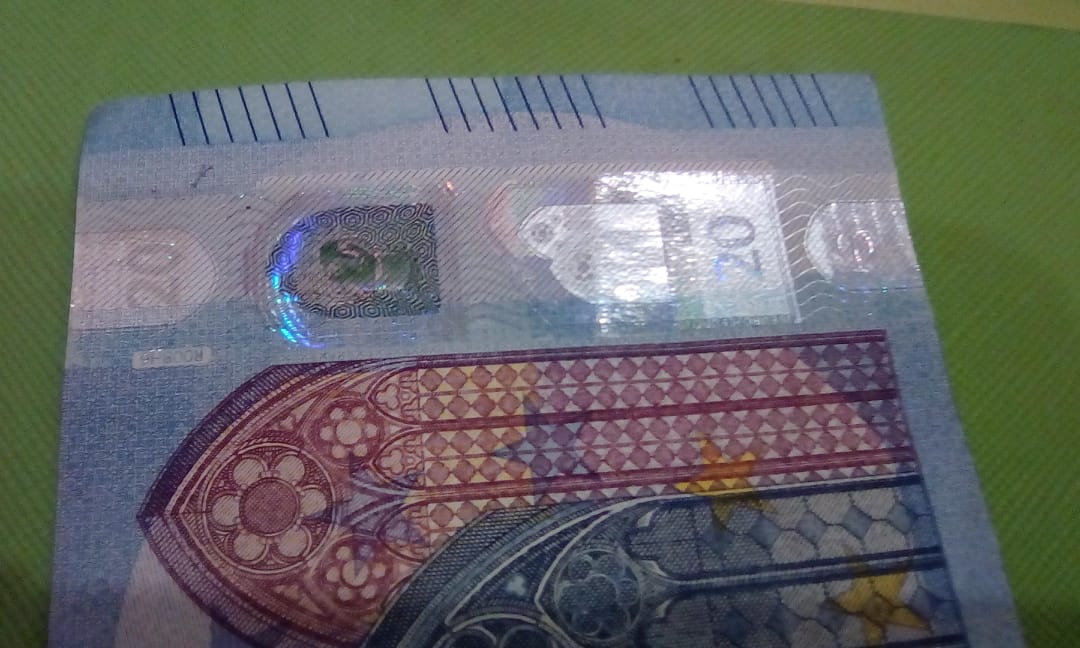 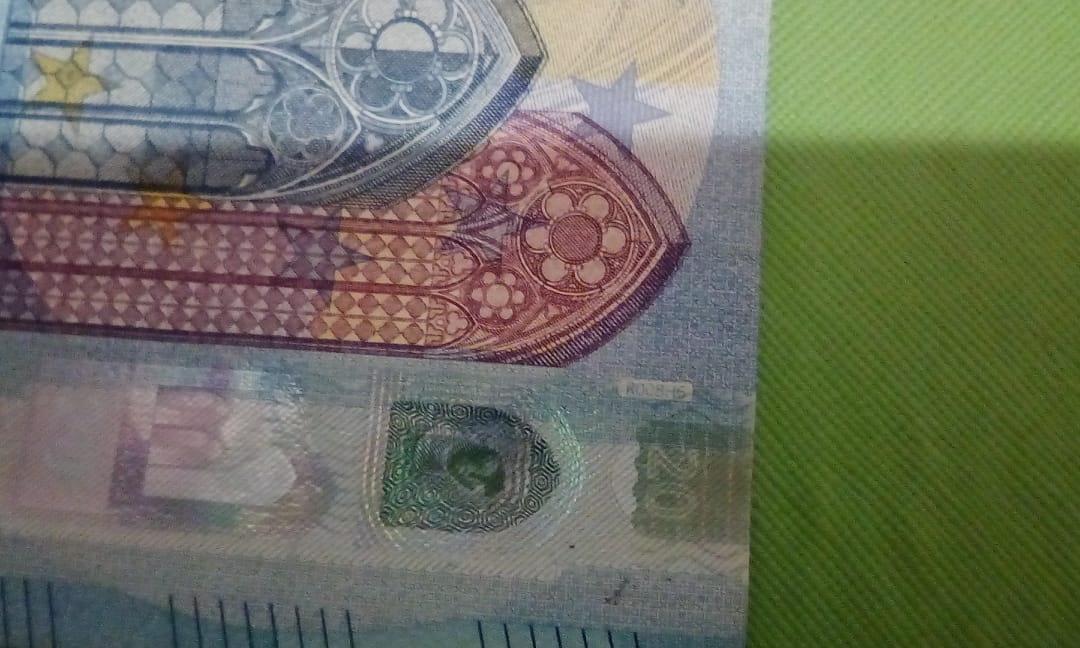 I found an article about rare euro notes and found in my wallet this 2002 50€ note which has a country code R. Couldnt find anything about that code so is it a common one or rare? Im not a collector or anything so I just was curious.

by ART
R was the reserved code for Luxembourg, but this state never printed its banknotes and used those printed by others. It is a fake, probably produced in the first year, when it was not known that Luxembourg would never have issued with its code.
All times are UTC+01:00
Page 1 of 1